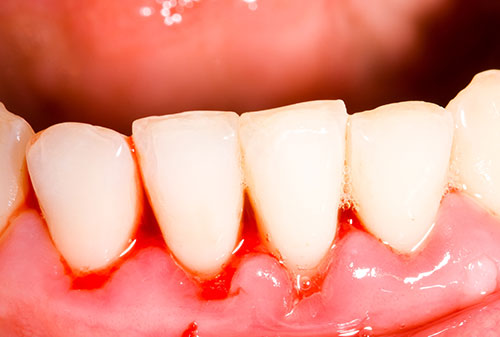 It is estimated that more than half of all adults age 35 and older have early to advanced stages of periodontal disease. Periodontal disease (PD) is the primary cause of lost teeth after the age of 35 – not dental cavities!

What is periodontal disease?

Periodontal disease is a chronic gum infection caused by plaque resulting in loss of bone support around the roots of teeth. Plaque is a thin film of bacteria that forms on teeth. Plaque converts to tartar if not cleared from teeth after 24hrs. Tartar irritates gums leaving them red, swollen and bleeding readily.

Eventually the gums peel away from teeth and create small pockets between the teeth and gums, slowly continuing to also destroy the supporting bone. Severe loss of the supporting bone is what loosens up teeth and make them incapable of functioning properly. Periodontal disease is often painless and will go undetected until bone loss is so severe that teeth are so loose they need to be extracted.

What are the signs?

The best way to treat periodontal disease is by early detection and prevention. A thorough examination can tell if you are at risk. Once diagnosed with periodontal disease, one must try to prevent further loss of supporting bone and/or other teeth.

Treatment usually involves a thorough scaling and root planning to remove plaque and built up tartar, thus allowing healthy gums tissues to reattach to root surfaces of teeth. Clean surfaces of teeth must be maintained by meticulous home oral hygiene and routine check-ups and cleaning. Advances stages of periodontal disease however, may require gum surgery, grafting, and/or extractions.

Book an appointment with us today.